The “Cottage” we were now going to be living in for the next year or so was located on a large tree farm just off of the river. Being a tree farm, it afforded some pretty awesome paths, trails, and secluded hideaways. 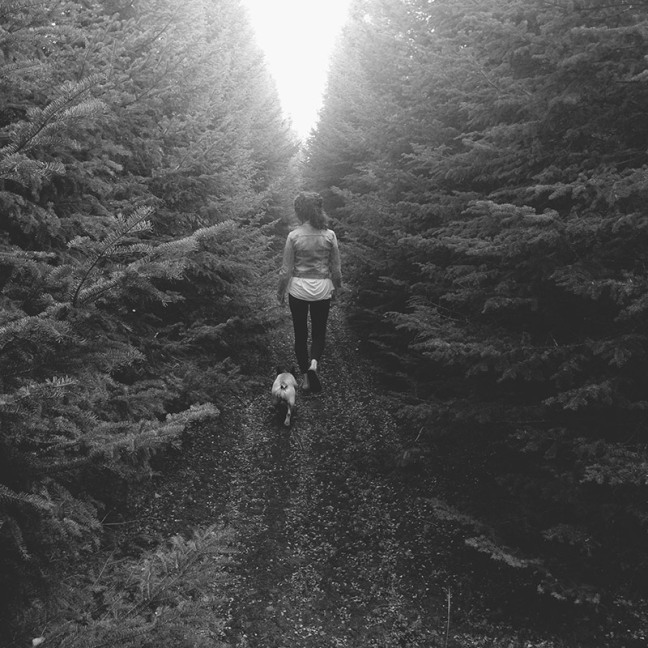 This is one of new favourite walks. Through the towering spruce and fir trees that are row upon row through the property.

Walking the property, and just beyond it, has many changes in scenery. The the heavy rows of trees to prairie and grass and down to the river valley. 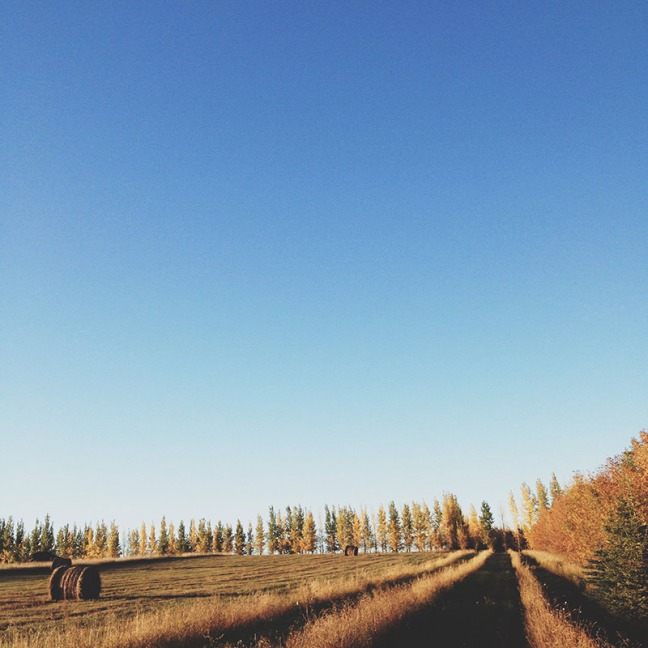 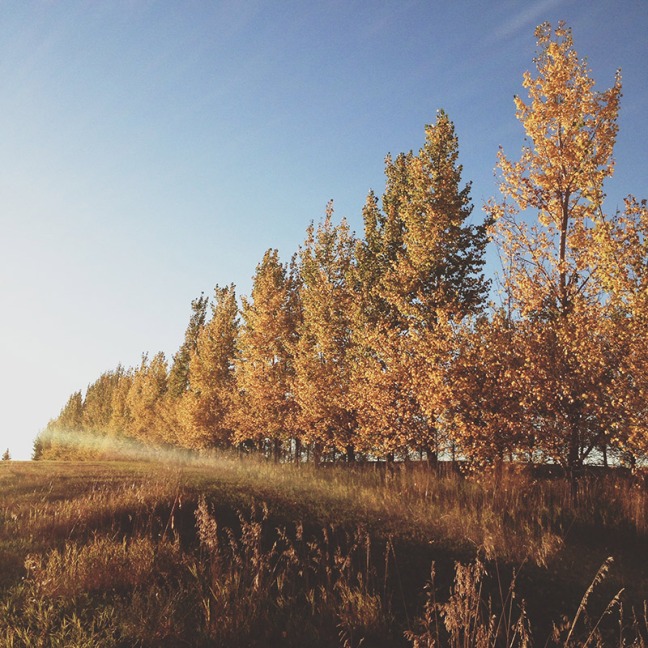 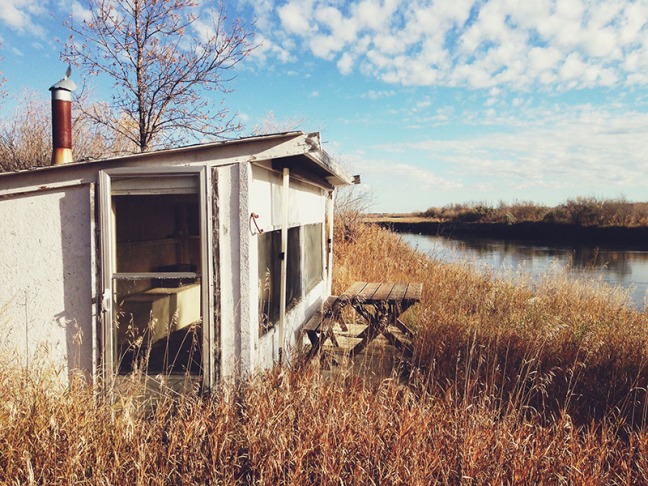 Ok, so these dudes are a bit down the way from us, but still, buffalos.

The move itself went surprising well for the most part. However while driving from the city with our last load of stuff in the back of the truck, driving down our grid road, the power steering of our truck locked up and I was no longer able to turn. Great. It was 10:00pm at night, but fortunately we were literally pulling up to the gates of the yard. Had this happened even 5 minutes sooner we would have had a long walk to our new home.

The following day, (and being a ruralite and all now), I figured I’d better try to fix my ol’ truck myself. That’s whatcha do in the countryside, right? I’ve never dared to touch my vehicles before. I’ve never even given my car an oil change. I’ve changed a tire once. And I have added window washer fluid… but that’s about the extent of my car-fixin’ abilities. Still, for whatever reason, I thought I could fix this truck.

Naturally, I called my dad the next morning. “Dad, I gotta fix my truck.” I explained what happened. “Did you check the engine coolant and power steering fluid?” He asked. “I don’t know where that is,” I replied, “I know where the window washer fluid goes though.”

“Well, what about the alternator? Can you see the fan belt? How does that look?” he asked. “Um, I don’t know what those things are either.”

“Jesus Christ.” (My father is a very religious man, as you can tell).

I finally decided to just use FaceTime and show him where things were. “Tell me what to take apart, k?”, I requested.

He figured he’d better come out before I caused irreparable damage to my truck.

I felt very manly the rest of the day: denim shirt and jeans + greasy hands + a bunch of socket wrenches (metric and imperial, of course) = Badass.

Over the course of the afternoon we took apart a bunch of stuff (they probably have names) and realized that the fan belt had come off. After watching a couple of YouTube videos we figured out how to put it back on. I really hoped it would just be a simple task of putting the belt back on and Vroom, the truck would live again. Unfortunately, it was not that easy. Despite our best efforts and several hours of work, it became apparent that Wwe’d have to get it towed into town.

Now getting a tow truck all the way out here would have been a small fortune. Thankfully for us though, Darcie (so smart) had just bought us a CAA membership, which for $180 would give you five free tows and they would be available for roadside assistance whenever needed. About a week later Darcie locked the keys in the car while it was running (not so smart) and CAA came out again to jimmy the door open. Clearly the membership has paid for itself already.

As you can tell, we are settling into the reality of the countryside quite nicely already.

After selling the house, the next inevitable and dreaded step was to begin the move. Moving sucks. I’m pretty sure it’s one of the worst thing in the world. Sharks, diabetes, crying babies – they got nothing on moving. I also hate packing – almost as much as the actual moving part. Oh, and I also loath unpacking. The whole process is just one horrible nightmare.

Darcie had talked to her cousin, a farmer with all of the fancy toys,  and had arranged to borrow a trailer he owned to use in the move. This trailer was not just large, it was fricking gargantuan. Thirty feet long, 8 feet tall and 8 feet wide.

For reference, our shop is 40×60″ and this beast filled it. I was pretty sure we’d be able to pack our whole house in this thing. Still there was this whole bit about actually packing the house first…

We had a big house and we had filled it with a lot of stuff. It wasn’t even important stuff, just things, objects. When you have the space, you will fill it. It’s impossible not to it seems. We certainly weren’t hoarders. In fact, we were anti-hoarders. We purged our house regularly. Every few months we’d go through our closets and empty things out that we hadn’t used or had no need to keep. Still, it was shocking how much stuff we had to pack. Well, I shouldn’t say we. I should say Darcie. I suck and stalled getting most of the packing done (although I hate to admit it). I found innumerable excuses as to why I needed to be doing something else super important – other than packing.

Miraculously the house got packed and when moving day came we were somehow ready to go. I really meant to take a picture of all of the boxes we (sic. Darcie) had packed, but I just had no desire to do so. Here was the trailer when we started and when we were done it was stuffed.

We took one last walk through the old house. It was a strange feeling, walking through the house that we never thought we would leave. I recalled the first time we had walked through the house just before moving into it nearly five years ago. It seemed so similar in a lot of ways, except that our fingerprints and our history were now apart of the house. I could see all of the work that we had done to make it more grand, beautiful, and restored. But this house had also changed us. It, too, had also left it’s mark on us. We were leaving this place as very different people than when we had first walked through it’s doors. We had a different perspective now. And in some peculiar and unpredictable ways, the house had helped us to recognize where we wanted our life to be.

When we had first bought it, we had talked about all of the “happy and sad stories” that the walls of this house had witnessed. As we stood in the main room and looked at the big walls, ornate trim, and 100 year old floors, we recognized that we’d certainly been one of it’s happy stories. I hoped this house would witness many more to come.

We’d experienced both extremes of a private purchase of a house and now it was time to experience the selling part. A few years ago when house sales were going crazy in the city, a marketing company called SaskHouses.com had offered people a secure means to market their houses and for buyers to find private houses for sale.

Our house was nice and we lived in a desirable neighbourhood. It simply made no sense as to why we wouldn’t sell it ourself, even if we were a bit nervous.

Figuring out the SaskHouses website was super simple. Make your write-up, submit 30 pictures, and, bam, done. What’s the cost of this little operation? 300 bucks… So, that’s a difference of $13,700. Not bad. The following morning they come by and stick a sign on the lawn. Then you wait for the calls.

Well, here we go, we thought. We both posted it on our Facebook and asked people to spread the word.

As we listed the house at 9pm on a Monday night, the last coat of paint was literally drying on the freshly built fence after the coop move the day prior (it had been a busy month).

The next morning we got up and checked the ad listing. Overnight it had received 1500 views! People were sharing it all over Facebook and it was getting tons of positive comments. “Dream house” seemed to come up a lot.

Ok, awesome, I thought, now someone buy it!

At 9am, we had our first phone call. The English fellow on the other end asked if the house was still available. Yup, you’re the first caller, I told him. He was relieved and said that he and his wife wanted to look at the house as soon as possible, BUT he had to go in for emergency dental surgery in 15 minutes. “Could we come over right after?”

Wow, these guys are serious!

In the meantime, I had had 5 or 6 other people call in the morning wanting to come see the house. Several of them being realtors calling for clients.

Now this is something I really couldn’t understand. Why is that people feel they “need” a realtor on a private sale? Is it guilt, fear, shame, paranoia or something else? I had to tell the realtor’s, “well, this is a private sale so we won’t be paying any realtor fees. If your clients would like to come look at the house they are welcome to do so, but you will have to discuss with them if they would like to pay you a fee above and beyond a possible purchase price.”

One of the realtor’s had the nerve to tell me that “99% of houses on SaskHouses end up going through a realtor.” He said that we could simply pay them a “smaller fee” in order to “help coach their client through the offer process.” Curious, I asked what he considered this smaller fee to be: $5000. I laughed out loud. Well, the form is pretty simple – idiot proof, you might say. It’s a fill-in-the-blanks sheet: write in the offer, write in your conditions, and sign your name here and initial there. That’ll be five grand please.

Dang, I’m so in the wrong business!

Anyways, about two hours later the first couple came to the door. The gentleman’s face was swollen and full of gauze from his emergency surgery. He couldn’t really talk but he was happy that I had waited to show them the house first. I toured them around and explained all of the work we had done. They loved it.

They’d been looking for awhile and had missed out on a house they’d really wanted because they’d been the 2nd people through the door (ironically the house was friends of ours who had recently moved to Vancouver). This time they were 1st and they weren’t going to miss this opportunity. They filled in the fill-in-the-blanks offer sheet.

The house had been for sale for 16 hours.