I do love concrete. It is one of those rare man-made products that border on being a living thing, like plaster or linen.  Those things that have such a rich texture and variation of composition that they seem to beckon you to touch them and get up close for a better look.

Of course, not everyone will share my appreciation of concrete, traditionalists have tended to cover up the concrete or at least extensively treat it with stains and dyes making them more palatable to themselves. Not us. When I told an interior designer about our exposed basement concrete walls, his response was, “Now that’s modernism with a capital ‘M’!” Cool, I said, “What’s modernism with a little ‘m’?” To which, he sheepishly did not have a response (I’m an ass). 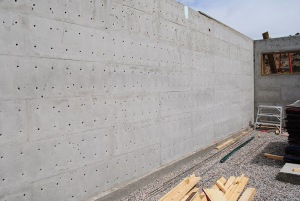 After the walls cured for 28 days, we had to seal the concrete. We wanted to get this done before the slab went in because if we waited to do the floors and walls at the same time, not only would there be framing and drywall in the way, then we ran the risk of the drywallers slopping crap all over the walls and making a mess of our beautiful concrete finish.  Like an idiot, I decided not to purchase a $25 dollar wand sprayer to apply the sealant and instead decided to use a nap roller. A job that would have taken me 30 minutes ended up being closer to 5 hours rolling every inch of the wall on multiple passes (lesson learned).

Next, we had to lift the giant water tank and Japanese soaker tub off of the floor and strap them to the steel beams (getting the tub in the basement was another adventure in and of itself. I will write about that someday). The under slab insulation was then cut and laid. We elected to use 7.5″ of under slab insulation, which is likely overkill, however this brings the floor insulation to R30 (our last house had no insulation in the basement at all). This EPS insulation was pretty cool. Having a honeycomb pattern as the top layer allowed for incredibly easy installation of the PEX piping for in-floor hydronic heating.

We knew we wanted the concrete floors to be a simple natural grey concrete, power troweled and sealed to complement the exposed concrete walls. No fancy finishing, dying, staining or grinding.

Now being that the basement concrete slab was to be our finished floor, it was pretty important to me that it not look like crap. Therefore the quality of the contractor needed to be top notch. Unfortunately for us, that was not how we entered into this venture.

I did not meet the contractor before he was actually on site prepping to pour. My wife had driven home early that day and came upon a most peculiar sight. A rather criminal-looking fellow standing beside a broken down early 1990s sedan, holding booster cables. Our place is a bit out of the way, so this was not a sight one would expect. Of course she stopped to see what the problem was (as the next passerby would probably not be until much later on). He proceeded to tell her that he needed a boost, he’d gotten in a fight with his boss and left from “that house being built down there”, pointing in the direction of our house. My wife, boosted his junk car, and asked if he was going back to work? Nope, he said, and drove off.

My wife drove to the site and found a lone guy working in the basement – no truck, no car, no nothing. She told him she might have just met his worker on the road and asked how he was getting home. Of course, he had no idea. She called our general contractor to come pick him up, however as she was leaving the property his buddy had returned with the car.

When I stopped by later to check on the whole situation, they were still there.  “Working late, boys?” I asked. “Yup,” the boss said, “but we gotta get home, we’re losing light and we don’t have any headlights.” (He wasn’t joking).

He told me that they were planning to have the concrete poured in two days, but would need to finish laying the rebar and tying everything in beforehand. “I’ll be back at 6am tomorrow,” he said, before driving off headlight-less into the night. I came by the house at 7:30am and, not surprisingly, they were not there. Sometime throughout the day however, they were back working away in the basement – this time, they’d brought a rusted old Honda, apparently this one had headlights and was more reliable.

On the Thursday, which was the day of the scheduled pour, they did not show up at all (what other profession could you simply not show up to work and there be no repercussions?). The bossman called our general contractor later in the day, apologizing and saying that he had to fire the criminal looking guy, but promised to complete the pour the next day. I told the contractor that it was tomorrow, or else he was off of the job.

On Friday, I received a phone call from them telling us it was “too hot” to pour the basement slab. Granted it was 34° Celsius. He said that the concrete would cure too fast and they would not be able to guarantee a nice finish. I wondered to myself – is this a convenient excuse for them in case the floors didn’t turn out? What am I to do? Ask them to pour it anyways? I called a couple of friends that I have in the concrete business and asked if they were pouring today. They were. I asked if there would be any reason to not pour a basement today and they told me that an insulated basement would be perfect in this weather – being at least 10 degrees cooler in there and not in direct sunlight.

That afternoon, we made calls to find a replacement for this retard concrete guy. I couldn’t handle it anymore – how many chances do you give someone? That being said we needed the floor done immediately. This idiot had already setback three other trades with his 5 day delay. Especially when Taylor and Curtis worked to hard to be ahead of schedule despite some of the challenges they faced with the Nudura One set up.

Incredibly we talked to Tyco Concrete Finishing, who said they would be able to squeeze us in early the next week. That Sunday evening we met the owner on site (I was relieved to see him drive up in new super duty 4×4 truck). He spent a couple hours with us going through everything, including checking what little work the other guy had done, making sure he knew how we wanted it finished, and confirming all of the dimensions and depths.

Two days later this was happening:

They had a crew of six guys on site and they did an awesome job. That night we came home to this. 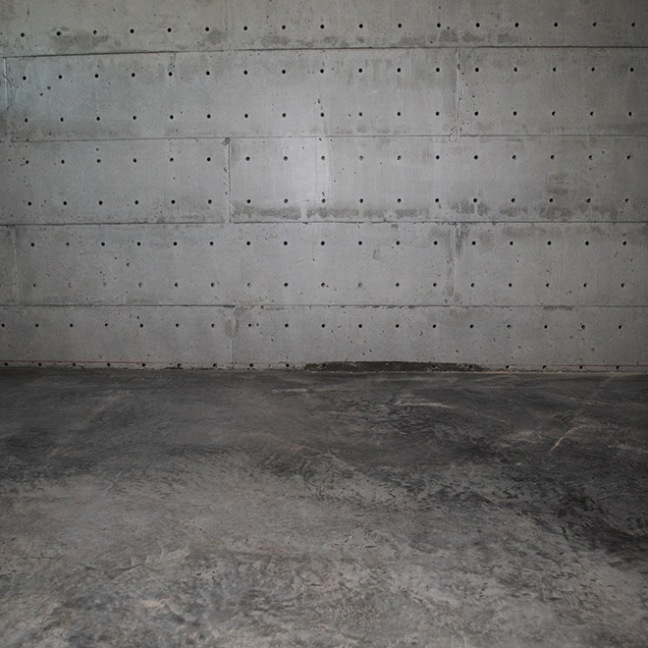