Wood gives beautiful warmth to any space. In our house we had wanted to use mostly natural or hand-finished products (avoiding plastics and other synthetic materials) with wood being a central focus. Our old house, although full of grand and beautiful woodwork, had been very dark with mostly mahogany, ebony or cherry stained wood. We wanted our new house to be altogether lighter – more windows, light woods, white walls. We had spent a considerable amount of time researching which woods we liked best (and were also available locally). In the end we chose three main woods for our house: Douglas fir, white pine, and white oak.

In designing the house, one feature we continued to come back to was a wood ceiling. As we were having concrete floors, wood on the ceiling, we felt, would warm the space nicely (drywalled ceilings and walls with a concrete floor seemed far too cold). And honestly, who doesn’t love a great wood ceiling?

The one major downside of pine, although it looks pink and white when it is freshly cut and milled, is that it yellows terribly with exposure to sunlight and over time. Indeed, all light woods will yellow to some degree, but pine is one of the worst for this (even white pine vs. yellow pine). Sure some people like that look, but not me. I prefer the fresh “untreated” look of the wood – but how does one preserve this appearance?

Being a bit of a Pinterest junkie while planning the house, we had found a lot of inspiration from Scandinavian cottages and cabins (leave it to them to have the coolest stuff). Many of which had beautiful light woods running through the house – woods that were white, pink or creamy browns – but not yellow. How do these Scandinavians do it?! Tell me your secrets!

But try as I might, I just couldn’t seem to find any information about it.

I briefly read a bit about the North American (read: ugly) way of “white-washing” wood. Which involves basically watering down white paint and then painting it on. It really looks as good as you might expect, which is really not good at all.

However one house that we have come back to time and time again for inspiration is the Mjolk House in Toronto (they had inspired our choice for Cloud White walls as well). I had taken special note of their insanely beautiful 10″ Douglas fir plank floors that were light and clean and not yellow in the least (Douglas fir is another wood that turns very yellow with time). I assumed these Mjolk people must have received special access to the Scandinavian secrets given that their design store sells Scandinavian and Japanese decor.

One day, though, as I was looking through articles about this house, I came across a tutorial they had written for Remodelista on called “101: Easy Whitewashed Scandi Floors” (admittedly the terrible title was less than appealing and I almost skipped past it).

“First, we applied a coat of Woca Wood Lye to bleach the boards”

Eureka! That was the secret I’d been waiting for!!

Where to find this magical product and how to get my hands on it was the next question.

After much searching, I eventually came across Woca Direct, who supplied Woca Wood products from Denmark to us lowly North Americans. And there it was: Woca Wood Lye (Picture: the heavens opening and the angel singing)…

WOCA Wood Lye is a mild, non-corrosive form of bleach, which may be used whenever a whitewashed or driftwood appearance is desired… Wood lye bleaches the wood and prevents the yellowing process of the wood.

I immediately ordered a tonne of this stuff, as well as the natural soap in white (which is used to clean the wood after treatment to reinforce it or as the Mjolk folks did, as your actual finish), the wood cleaner, and the master oil ﻿in﻿ white, which is what we intended to use as our finish coat.

I made up a test piece of white pine using the Lye, Lye with White Oil, and No treatment and left it out in the sun for a couple weeks to see how the colour changed. 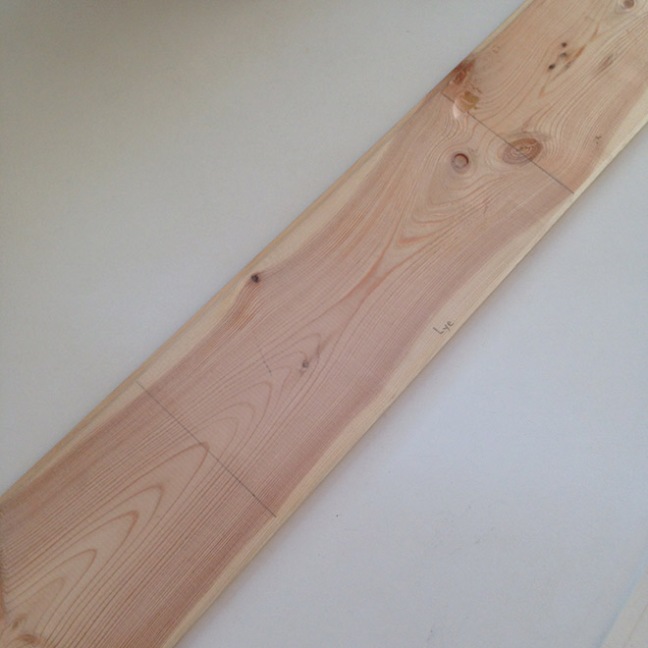 I was as impressed as I had hoped I’d be with the change that the Lye made. Within moments of applying it the wood lightened, highlighting the pinks, whites, and browns of the wood. After leaving it for two weeks, you could already see the untreated pine (to the far right to the photo) turning yellow. The Lye and Lye with oil (on the left and middle) did not fade or yellow at all. I found that the White Oil really didn’t change the colour of the wood further, but simply helped to smooth out the grain and give a nice hand to the wood.

During the summer, while the house was still at the framing stage, we and our amazingly awesome neighbour spent the weekend treating the tongue and groove pine (by the way, we ended up choosing 1×6″ tongue and groove over the narrower 1×4″. Less lines with the wide planks looked more modern and attractive then the narrower stuff, in my opinion).

As was recommended, we first cleaned each board, as they were pretty dirty from the drive out on our gravel road, with the Wood Cleaner.

After drying for a couple days, we began the Wood Lye application (photo) with a simple nylon brush. It is pretty watery stuff so it goes on fairly easily, but you have to make sure you cover the boards fully as any areas that you miss would yellow in time. The wood lye dries quickly within an hour so we were able to get a good system going with two of us applying the Lye and my wife oiling the boards after a minimum hour of drying.

The oiling process was quite lovely. We simply used a cotton rag and hand rubbed each board. The finish it gave was beautiful. The process was lengthy though from start to finish, probably in the range of 30 hours for the 900 sq. ft. of pine.

It would still be a couple months before we would eventually be able to install this stuff (this is the beauty of having a big shop to store all of this stuff in – highly recommended). But after the nightmare of the concrete floor finishing, we were excited to finally be able to have some pleasure in seeing the ceiling installed.

Both myself and my good friend (who will be doing our cabinetry, stairs, window sills and doors, and runs Rhine Artisans) highly underestimated the time it would take to install the ceiling though… we naively thought, a day, maybe. Well it would be four full days total to complete the work, largely due to the precise cutting required around the light boxes (our fixtures had less than 1/8″ of clearance around the 4″ round boxes) and the hand planing required at the ends of the walls and hallways (apparently drywall isn’t straight, who knew).

But, in my humblest of opinions, this looks damn sexy… 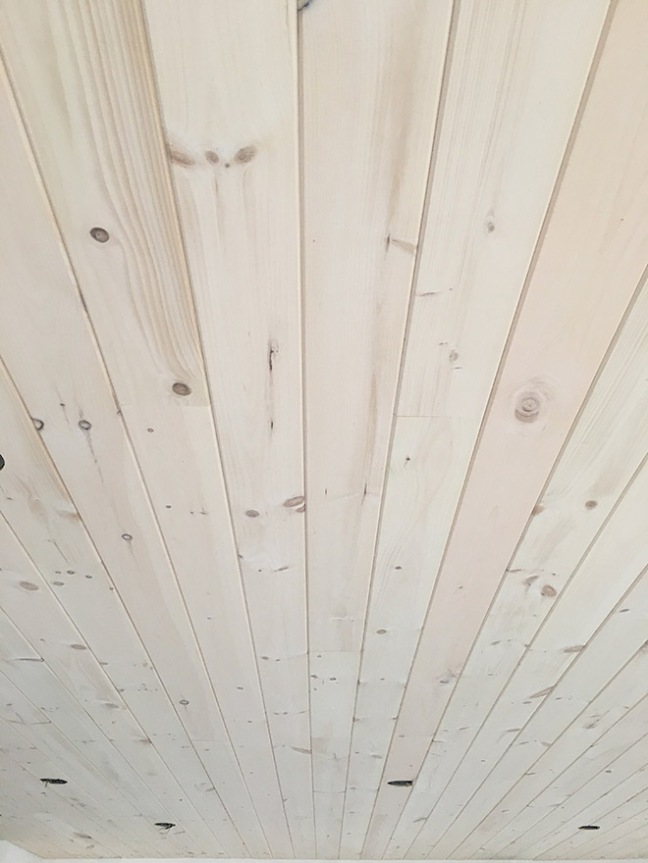 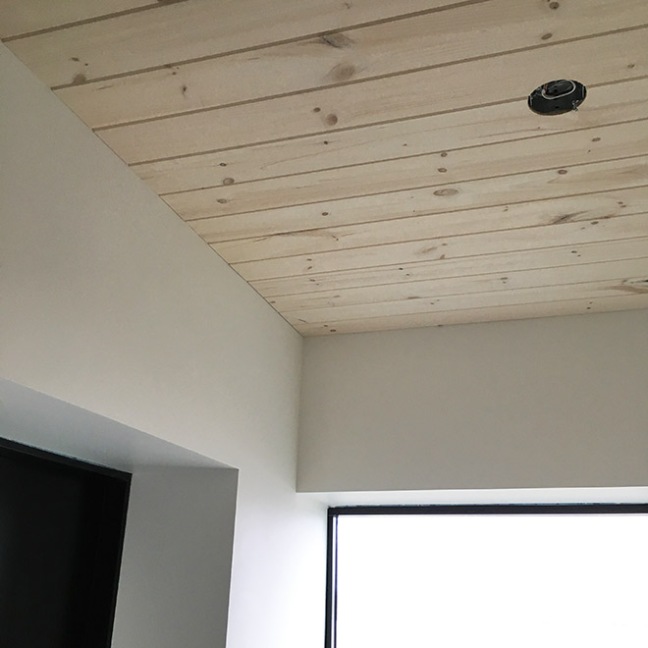 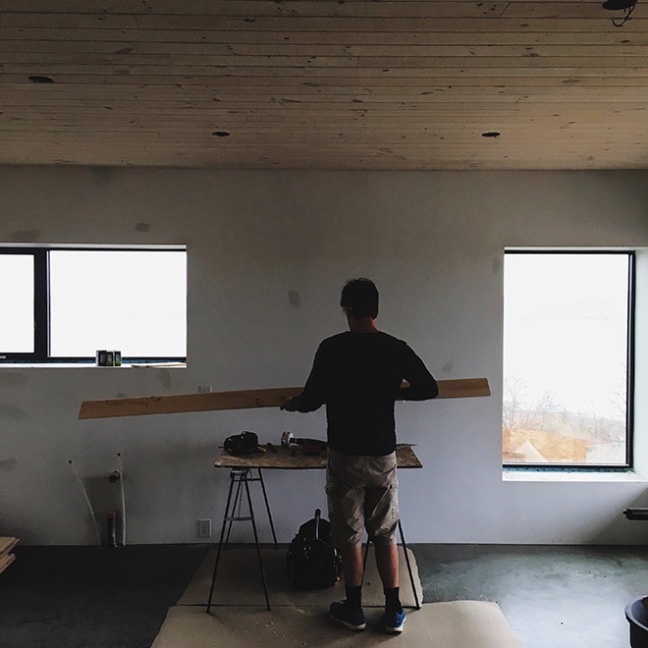 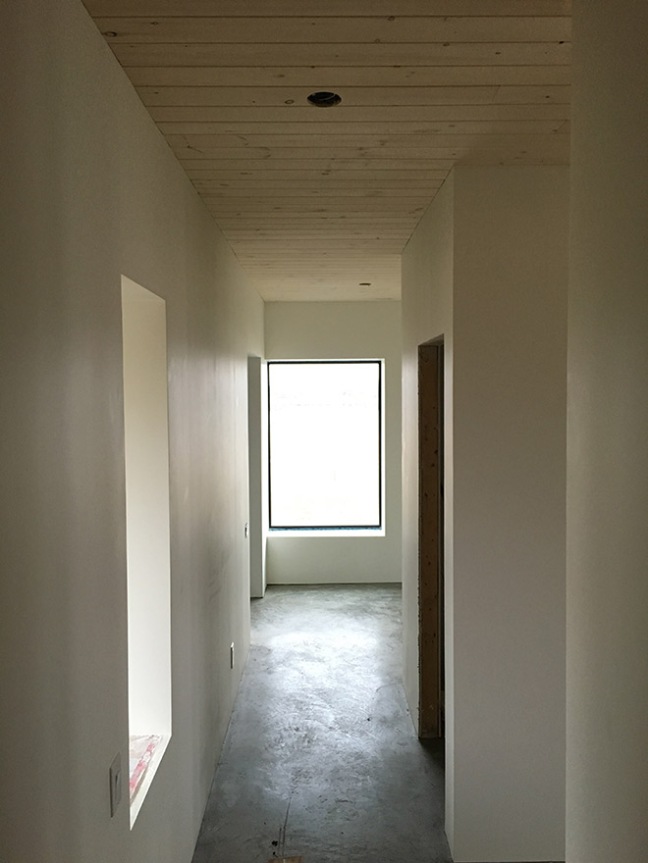 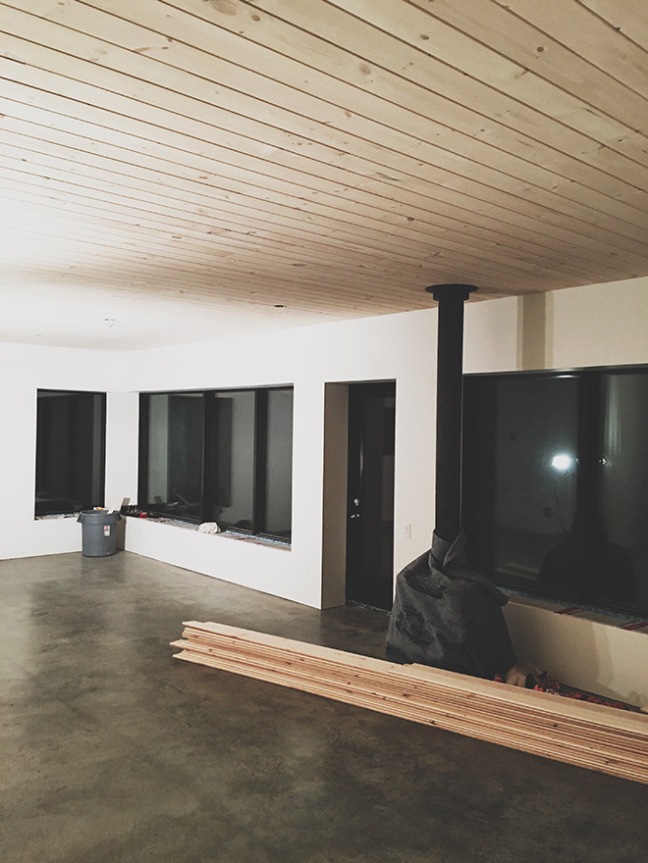 This just doesn’t get old.
Not a bad breastfeeding spot @darcie.earle
Baby life.
Coyote spotting.
9 years married to this beautiful lady and super momma. I couldn’t imagine a better partner to journey this life with. ❤️
Soaking up all the family time.