Because of the atypical pine soffits we installed, we needed to do something a bit different for the fascia as well. For people who don’t know what the difference of fascia and soffits are (as I did not):

I really hadn’t given it much thought at all to the eavestrough and fascia until I started to consider how we would divert water away from the house. The natural thought, of course, would be to have downspouts that lead water away from the foundation.

In our case though, we had two corner windows and the thought of staring at some ugly downspout from my window view was not appealing. We asked our designer, Crystal Bueckert of BLDG Studio, what she recommended. A custom house needs custom eaves, she told us. As for avoiding an ugly-ass downspout in our view, she recommended a rain chain. A rain chain, of course!

We searched out a lot of rain chain options, from the very simple chain links to the more artistic copper cup varieties. I liked the look of the simple chain links, but I wondered if it would look too boring with just a hunk of chain hanging down (although I have seen some that look very cool). We were really drawn to the pretty copper Japanese rain chain cups and decided to order two from Amazon.com of all places.

As for the fascia and eaves trough, it was really amazing to me that absolutely no one in the City offered anything other than the standard gross eavestrough profile.

We wanted something a bit nicer than this.

We asked our designer to come out and draw up a plan for the eaves and fascia for us with the plan to send it off to a metal fabricator to manufacture it. I called up a place in town and after waiting a number of weeks we finally received the sample piece.

I was really happy with how it came out.

Now, I could go on a tangent here to talk about how frustrating it was waiting for the quotes (I was told “I’ll have it to you tomorrow” for 7 days in a row). Or that when they told us it was all done and come pick it up, that it was only partway done and we had to come back not once but twice to pick up the rest. Or when we thought we finally had all the material that we were in fact, 8″ short on either side. Or that when we got a contractor out to install the fascia and eaves, he looked at it and said, “I’m not installing this.” I’ll spare you my pain (this time) and I won’t go into all of that.

But that did meant that we had to figure out how to install this ourselves.

The first thing we had to do was install the fascia (AKA the stuff at the edge of the roof that also covers the edge of the soffits). I have to admit, this was one of the few jobs that we’ve done with the house that we finished and said, “wow, that was easier than I expected.” 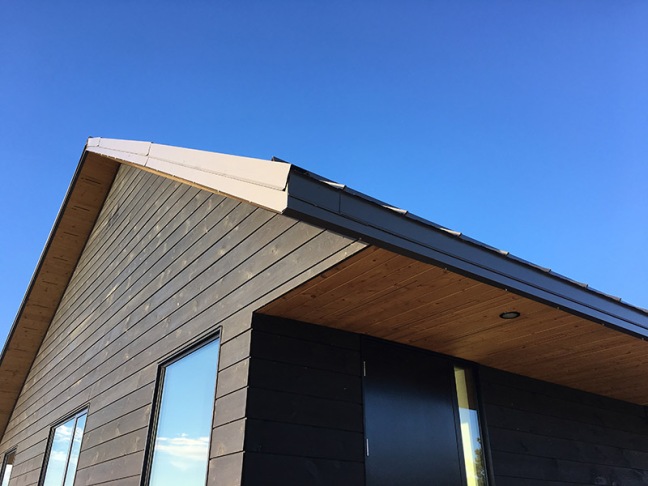 It was pretty sketchy though on a 24′ extension ladder (standing on the top rung) holding my drill in one hand and supporting last piece of fascia with my other hand at the very top. But boy oh boy, that little bit of trim sure made a nice job giving a finished clean edge to everything.

That went so well that we decided to tackle the snow stops next. Now this was a less pleasant job and my forearms have only recently started to recover. The snow stops are meant to stop the snow (as if you couldn’t have guessed) from sitting in the eaves and potentially tearing them off the side of the house. It’s also a bit of a safety measure so that heavy snow/ice doesn’t come crashing off the roof onto someone’s head.

These things are very heavy duty though with two layers of heavy gauge steel that have to be drilled through to install on to the roof. I think I broke 8 or 9 metal drill bits for this job.

We worked late into the night, forgetting to actually eat lunch and supper until about 9pm.

The next morning we awoke to tackle the eavestroughs.  This was a bit trickier simply because we needed make sure things would run where they’re supposed to run (i.e. downhill). We used a level in each section of the gutters to make sure the angle was relatively consistent. We also decided on the south east corner (where our corner window facing the river is) that we would not put any drainage there and have it all run to Japanese rain chain at the other end (which would be just off the side of the yet-to-be-installed deck). This meant that there would be a drop from one side to the other, but once installed, it really is not terribly noticeable.

On the north side of the house we placed the custom downspout in one corner and the Japanese rain chain in the other, next to the main entrance. The downspout will lead to a large rain barrel that we will use of watering the chickens and plants around the house.

The last thing I did, at about 9pm, in the dark where the effect wasn’t quite as great, was installs the rain chains. But the next morning we got to take it in – in all its’ glory. 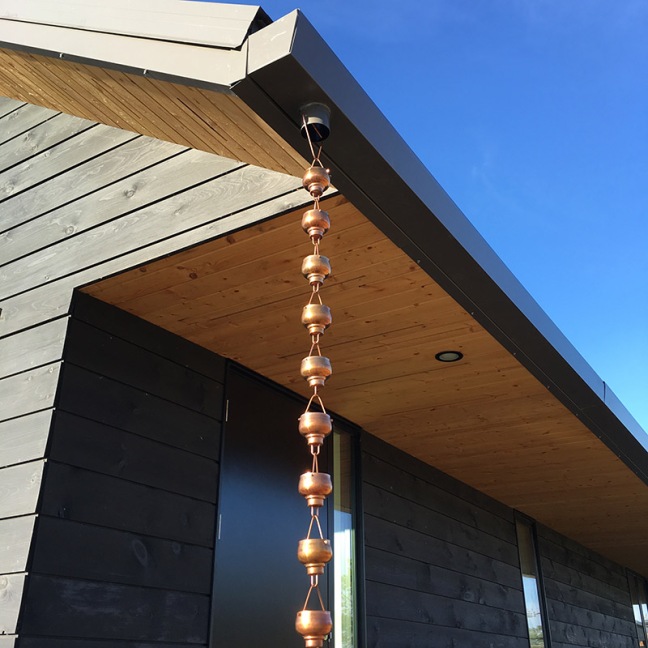