There are a few things that we’d really liked in our 102-year old Craftsman character house that we’d sold prior to building our eco-house. One of the things we knew we would miss was our old cast iron clawfoot tub. It had been refinished some years prior, but was not “original” to the house, even though it was still pretty old. We could tell because it didn’t have the original “claw” feet (some fancy-pants tub designer must have thought the brocade and ball looked better?), but it was still beautiful and comforting to have. I’m generally not a “bath-guy” but I do love a clawfoot tub. If for nothing other than it’s iconic design (most other tubs I could do without – with the exception of the Japanese-style deep soaker tubs, which are amazing and would go in our basement bathroom). So when designing the bathrooms we really wanted to try and find an original cast-iron clawfoot tub (with clawed feet) for the master bathroom.

After some searching on Kijiji, my wife eventually found one in a small town about 2.5 hours away. Most the clawfoot tubs that you’ll find are usually being pulled out of old houses being renovated. Even though some people don’t want them in their house anymore they still want a pretty penny for them – usually in the range of $400-500. This one was only $150 and we were able to talk them down to $75 for it! Ha!

I do wish I had a before photo of it, but at the time I couldn’t bring myself to take a picture of it – it was just so gross. You’ll just have to use your imagination. Picture: Rust around the drains and running down the enamel under the taps; it had been painted a nasty bluish-green colour on the one side (apparently the side you’d see?); and it must have later in life been built into a surround (when people thought clawfoot tubs were ugly – WTF) because there was CAKED on caulking around the sides and edges.

It was going to be a serious project to refinish this tub. We followed the steps from This Old House blog.

First, we had to scrape all of the disgusting caked caulking off of the perimeter and sides of the tub with a razor blade. We weren’t too worried about scratching it because it would all be stripped and recoated later.

Second, we used a hydrofluoric acid product from Home Depot, it’s in the paint section, to etch the enamelled surface. Make sure to wear protective gear and a respirator with this. This is toxic stuff. We didn’t worry about stripping the outside of the tub because we planned to simply paint over it anyway.

Third,  we used our Dremel tool with a grinding bit to grind off the rust spots of the tub. The dremel worked very well in getting in and around the faucet and drain holes.

Fourth, my wife used an auto body filler compound to fill in the areas that had been rusted and ground down. This stuff works like a charm. She then lightly sanded the compound with a high grit sandpaper to smooth out the filler and the cast iron.

Fifth, was to paint the outside. We wanted this to be a bad-ass black clawfoot tub. We used Rustoleum spray paint in a semi-gloss black. I was impressed at how well this well on. We ended up using three cans of spray paint – pretty well one can per coat.

The sixth step was the one I dreaded the most. Spraying the epoxy enamel paint on the inside of the tub. This is the part you really don’t want to F-up. If you do, you basically have to start back at Step 1 and repeat. We purchased spray gun (high-velocity, low-pressure) for this job as really there is no other way to do it. The spray guns are less than $100 and you will use it again if you have it. Once again Home Depot carries Rustoleum Tub and Tile epoxy paint that is ideal for refinishing the enamel coat. One pack is not quite enough to do the tub so we purchased two packs and used only a small amount from the second (we would end up using the rest of the paint for two cast-iron sinks that wifey refinished in the same way later). Each pack comes with two cans that are both super toxic poison that you mix together. Pour a small amount into the spray gun, hold it steady and on the mid-range spray (not too light as then it will be speckley and not to heavy as it will run), pray to your God, and proceed with even coats of the paint. I started at the bottom of the tub working my way side to side along the long end. For the sides of the tub I used an up and down motion that seemed to give good control. And finished by doing the top and lip, but be careful not to ‘mist’ too much into the tub as it will make it speckled. We let this dry for a day and then applied a second coat in the same fashion (the This Old House blog recommends three coats). The sides and top of the tub came out with a very nice smooth finish. The bottom was a bit speckled to the hand though looking at it you could not tell anything was different (I think I probably misted this too much when doing the top/sides).

All in all this was a time consuming process, but taking it from looking like a piece crap trash to a beautifully refinished, gleaming and BADASS  tub was extremely satisfying. Seeing it installed in the bathroom, waiting for its first soak is such a good feeling. 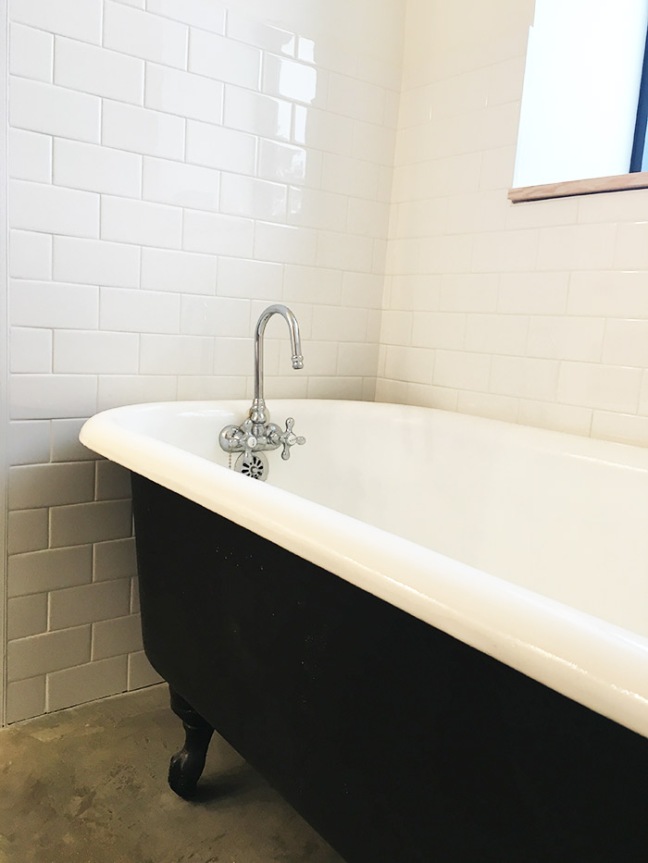