As if we didn’t have enough concrete and thermal mass in the house already, we decided to install a white concrete countertop in the kitchen. We’d priced out quartz as an option as well – a machine-made product that has the benefits of durability, scratch-resistance, stain-resistance, heat-resistance, and being made from some recycled products. But the reality is, because of all of these benefits, it also is very expensive, shockingly so, in fact. We needed 14’x24″ for the long counter. I don’t know what I expected the price to be, but it certainly wasn’t the $8000 price tag they quoted. Ouch.

As an alternative, our kitchen cabinet maker, Ryan Unger with Rhine Artisans, suggested a concrete counter. He was building our butcher block counter for the island in rift sawn white oak and he’d also done a few concrete counters himself before as well. Perfect!

He’d never made a white concrete counter before but he was game to try it. It probably helped that he and I have been good friends for a number of years and he’s been willing to try a few “different” woodworking jobs for us on this project..

Although I’d had in my head that I wanted a crisp white counter for whatever, I was excited for the “handmade” benefits of the concrete counter. True, concrete can stain and scratch, but being hand-made, we’d get something completely unique and special.

On a balmy October Saturday the guys came out to build the concrete form and pour the counter. It took them nearly 6 hours alone to make the form, which they would pour in three sections, due to the size, weight, and need to form around the under-mount farmhouse sink. It had to be perfectly level, square and flush. They used white MDF for the form to make it as smooth as possible. For structural support, they used wire mesh, which they smartly spray painted white in the event that it would “shadow” through when poured.

For the concrete itself, they were able to source white portland cement, white aggregate and white sand for the mixture. 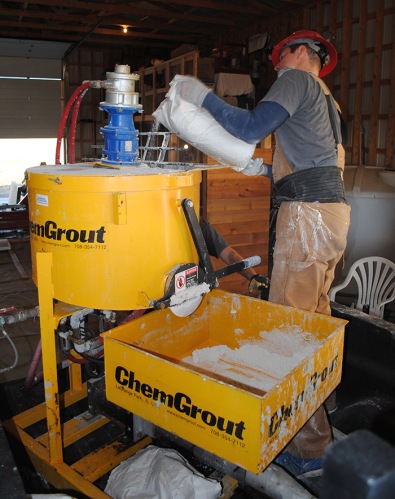 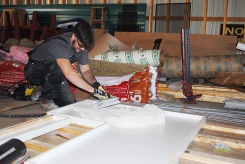 We covered the counter with a tarp and placed two heaters in there for the next 3 weeks. The temperature was dropping and these would need to be sitting in our shop for the next three weeks.

It was mid-November and above freezing still, which is bizarre for our area. It was terribly fortunate as had it been below freezing we would have had to haul the counters to the basement of the house for them to polish there. That would have sucked.

As it was they were able to polish the counters outside – only slightly as too much polishing would bring out the aggregate. We still wanted these to be as white as possible.

Once the sun went down though, it was freezing and what we had was what we were going to have. The three of us then needed to carry these in through the front door.

It was SHOCKING how insanely heavy each piece was. I don’t think I’ve ever tried to carry something so heavy before. We nearly died, but miraculously we were able to get them up the steps to the door and placed on the cabinets without any serious injury or damage. 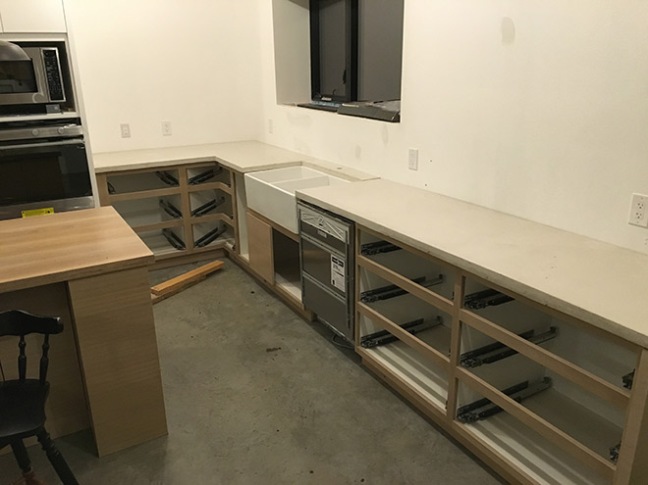 The counters were not a crisp white, which I had originally wanted, but instead are a creamy white, which actually looked amazing against the creamy white oak cabinets. Plus the organic, handmade, imperfections of the counter really added a nice feel to the whole space. Very wabi-sabi.

After another couple weeks, we sealed them with an acrylic sealer (we tried a food safe, water-based sealer but this did nothing, as we found when a single drop of red wine left our first stain – Grrr [vinegar and elbow grease made it less noticeable]). We then added a topcoat of beeswax to finish it.

But before we would seal this, I’d need to finish my tiling work on the backsplash.