Excellent levels of airtightness are equally, if not more, important to the level of insulation you decide to put into your house. These really are (insulation and airtightness) the two pillars of an passive house and pretty well any other Eco-house building.

For our house, we’d gone with high levels of insulation in the range of 3x the typical amount for standard construction: R32 under-slab and basement walls, R56 walls, and R80 attic. However in deciding our insulation levels and our targeting goals for airtightness, we did try to strike a balance between cost-benefit and recognize the point of diminishing returns.

I have written about our insulation choices previously here and here, so I will not go into that as much, but in terms of airtightness there are some basics that are worth discussing. The fact is: air leaking into and out of a building is not efficient no matter how much insulation you have in the walls. Although insulation decisions, thermal bridging reduction, and solar gain can be designed into the house, airtightness can really only be ensured while actually constructing the building. Airtightness is tested with a blower door test and is rated based on “air changes per hour a 50 pascals of pressure.” Typical construction in Canada reaches about 3 ACH. The Canadian R2000, our high-efficient energy standard, is 1.5 ACH. While the Passive House standard is a whopping 0.6 ACH.

Although I was hoping we could target the extremely difficult goal of 0.6 ACH as per Passive House standard, the question was – how far ($$$) are you willing to go to reach this? As with insulation levels, there is a point of diminishing returns. Will 0.8 ACH versus 0.6 ACH be anymore noticeable in terms of user comfort? And over the lifespan of the building would you ever balance out these costs?

We decided to set an ambitious, but realistic goal, of 0.8 ACH.

The reason for this was four-fold:

All that being said, we did make every effort to design the house to be as airtight as we could. The dense-packed cellulose in the walls itself provides a high degree of air sealing on it’s own. We limited the penetrations into and out of the house by selecting a condensing dryer from Bosch and having an electric boiler (the only penetrations are the chimney stack, the water cistern pipe, and the HRV). We used a standard 6 mil poly for the vapour barrier with acoustic sealant at every seam. Each seam was also taped with standard Tuck Tape to ensure another layer of added protection. Around the windows and exterior doors we purchased and used the Teson Profil air sealing tapes to attach the vapour barrier to the frames. Although this tape is very pricy, it made sense to me to use it here as the greatest area of air leakage is often at the window frames and doors.

Now it was time to test the house.

The testing is done through a Blower Door test. “A blower door is a powerful fan that mounts into the frame of an exterior door. The fan pulls air out of the house, lowering the air pressure inside. The higher outside air pressure then flows in through all unsealed cracks and openings.” The test is repeated in the same way by drawing air into the house. “The auditors may use a smoke pencil to detect air leaks. These tests determine the air infiltration rate of a building. Blower doors consist of a frame and flexible panel that fit in a doorway, a variable-speed fan, a pressure gauge to measure the pressure differences inside and outside the home, and an airflow manometer and hoses for measuring airflow.”

Essentially it simulates wind blowing against the house in all directions at the same time. The test takes about an hour to administer with the tester taking multiple readings at different fan speeds both while depressurizing and repressurizing the building. 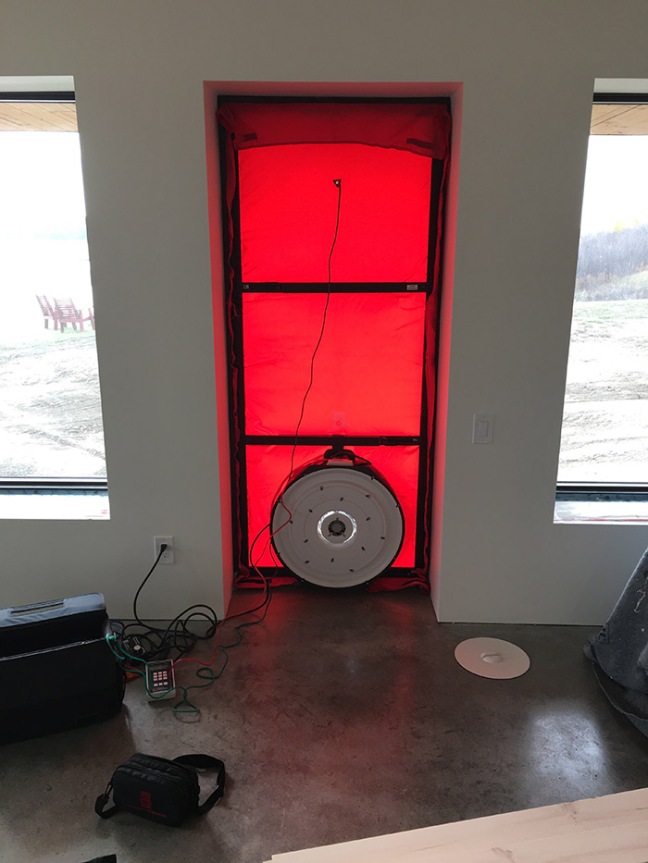 While the test was running we also used an infrared meter to look at any hot/cold spots.

Right bang on our goal. Not bad. The guy who tested it said it was the tightest building he’d ever tested before.

I was happy enough with it, but a couple days later I happened to be standing beside the chimney on a windy day and I could ever so slightly hear a whistle through the pipe. I looked closely at the seams and saw they were not fully sealed. Damn!

We’d also had some crappy construction locks on the doors and I put my hand against them. I could feel wind there too! Double damn!

After sealing these leaks and a few other tiny ones we found, we did another retest a couple weeks ago. This time, the results were 0.72 ACH at 50 pascals. Not too shabby.

After talking to the tester, though, he thought that given the higher than expected discrepancy between the depressurized and repressurized values that maybe the vents of the HRV had opened slightly causing a skew to occur. He’d like to do one more retest in a couple weeks, thinking this would take it down to 0.65 ACH or lower. At this point, he’s doing it at no charge as he’s simply interested to see what the truest level of airtightness is.

For me, I’m happy to know that we reached almost Passive House airtightness values while still being as economical as possible.