This is a post I’ve been wanting to write for the past 3-4 months. When I’d been researching the building of the house – and in particular, reading a number of blogs like this one (a cathartic rant on the trials, frustrations and triumphs of building a green home – is that a reasonable tag line thus far?), I’d get to “the end” of the blog and think, OK, how do they like living there? What is your life like now?

I have kind-of written about this before, from an eco-perspective, but now I want to write this from a life-perspective.

The funny thing is that really life just starts to gradually get back to normal – whatever that new normal might be for you. For Darcie and I, we really weren’t entirely sure what that would actually be. We’d lived in the City for our whole lives, except for the 14 months of living in the small cabin down the road from our future home. And this certainly was not a “normal” time.  Living in a tiny space and spending all of our free time dominated by the house build.

Indeed I’ve still been conscious of the house (at times more than I’ve wanted to – more later), but, as I’d told friends when we were nearing the end of the build, “I can’t wait to not have all of my thoughts be entirely about the house.” And over the past few months, they haven’t! I wasn’t sure where my thoughts would go though and what exactly I would start spending all of my new free time on.

Here are a few…

Happily, I’ve been spending a considerable amount of time in the kitchen, which is, most definitely, my favourite place in the whole house. I love to cook and finally having a space to spread out in with a lot of counter space, a big sink and plenty of storage has made cooking so much more enjoyable then it ever had been. 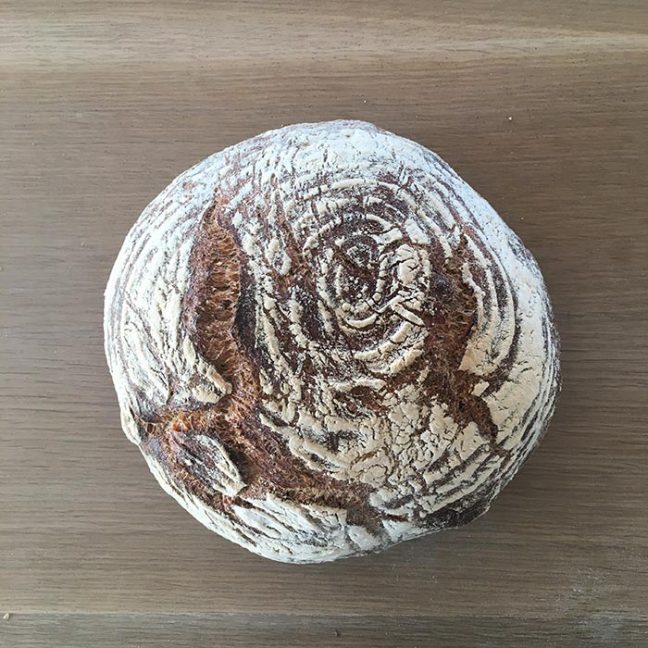 Bread baking like this is an amazing combination of alchemy (turning 3 mundane ingredients, tasteless flour and water and a bit of salt, into deliciously rich and complexly flavoured bread), culture (humans have been baking bread in this way for nearly 10,000 years), tradition (there is nothing like breaking and sharing home-made fresh bread with friends), and art (these things are so darn pretty! And never the same).

I never would have attempted this in our old house, but for whatever reason, this place has inspired me to do so.

Since starting bread making with wild fermented yeast, we’ve also become somewhat obsessed with other means of fermentation. We recently have made sauerkraut, kombucha, and kimchi. And as soon as the garden is up, I’ll start sour pickles, beets and carrots. I’m grateful for the counter space as it is now regularly covered with crocks and jars, in addition to the mess of containers from my bread and other cooking. 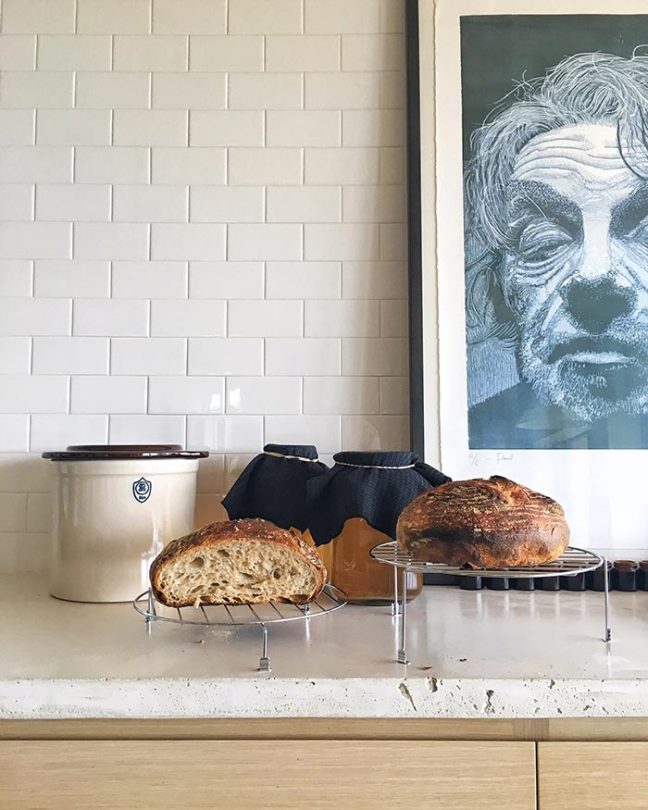 We also decided to purchase a canoe this year to start to explore the river. We’d debated about kayaks and even paddle boards, but a canoe, at least to begin with, seemed to be the most logical. 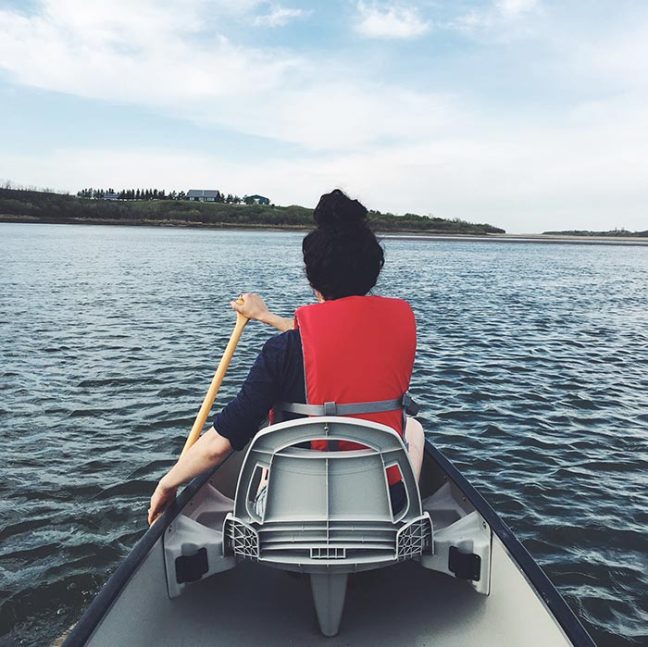 As you may have noticed, the scenery out here is pretty amazing. We have a family of whitetail deer living in the valley across from the house, a trio of eagles the frequent us with fly-bys on a daily basis, recently pelicans have been fishing our front and even trumpeter swans have come by, in addition to the usual Canadian geese, multitude of waterfowl, and even the odd stray goat (we woke up to a goat staring in our front window the other day – most peculiar!). 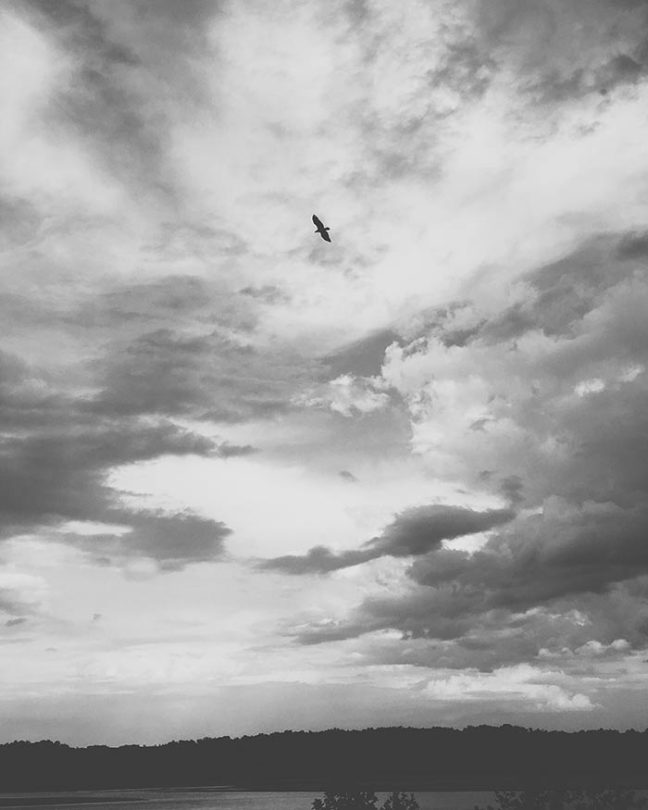 Did I mention that I found a dog too? No? Well, I did. It was actually several months ago while driving into work that I spotted a black and white streak in the ditch. At first I thought it was a skunk, but as I got closer I realized it was this mutt:

Pretty cute. This was the day I found her shortly after taking her to my sister’s house. Honestly, how could I not stop and pick her up in the middle of nowhere? We put out “Dog Found” signs and reported her to the local animal shelter, but no one claimed her. For whatever reason we thought, sure, we could keep her (even though we were still not even moved into the new house and had a tonne of work yet to do. What’s a little more stress?). Read: this was a bad idea.

We did try to keep her. We even drove into town each weekend for obedience classes and woke up at 5:30am every morning to take her our for a long walk, but unfortunately she simply did not get along with our long-time French bulldog, Fiona.

Actually they really and truly hated each other – with a passion. That burned deep inside their little souls. We kept the pup for about 4 months, before finally realizing that we could not have her anymore. Fortunately she ended up going to a really good home. My wife’s colleague trains dogs and was overjoyed to take her in.

As the Spring has turned to Summer, our thoughts started to turn towards the garden and orchard, that we’d been determined to create. Little did I know that although the house took 8 busy months to build that the outdoor work – well, it might take a lifetime.

Oh, to be so naive. Is it a blessing?