I felt inspired the other Saturday, so I built a pergola. 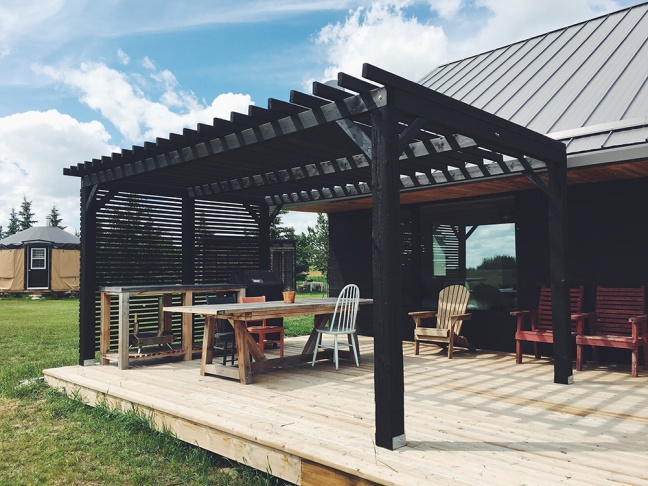 Truthfully though we’d been trying to figure out how to shade our south-facing deck for quite awhile without overly sacrificing solar gains in the wintertime. This was not an easy thing to decide and we’d belaboured over it – well, since we built the deck last year.

You see, when it’s sunny and hot here, like it has been these past few weeks, it is smoking hot, out on the deck. Too hot. And with my wife home with our baby now, she would like to be able to get out of the house and sit on the deck, but it’s just too damn hot and sunny. The other day when I came home from work, I found her and the baby lounging on the north side of the house back stoop, in the shade, but looking out at… well, the driveway. I sat down with her and we decided, we gotta do something about the deck.

We did pick up a shade sail last year, but hadn’t put it up. This is one of those canvas/mesh shades that you see at California pool sides and in the outback. It’s good for sunny hot places. The nice thing about it is that it can be removed in the winter and packed away. My concern with it too though was: How do we secure it and how do we make sure the wind doesn’t wreck it? (It’s sunny and hot and windy here in the summer in some combination). I could never answer those questions.

A pergola though, combined with a shade sail, might just be the answer though! I have always liked pergolas – the filtered light, vines growing up and over, the little bit of intimacy it gives to be outdoors – but, I was concerned about shading things TOO much. We still need that solar gain in the wintertime. I went back to my trusty Pinterest resources and looking at modern pergolas (not the traditional curvy end ones). The epiphany came when I realized I did not need to run the top slated boards east-west like most pergolas for maximum shading, but instead, could run them north-south. Eureka! With the added shade sail underneath we could have our full shade, but then when we remove it in the fall, the pergola would still allow the sun through (albeit, slightly less so then when it was unobstructed).

I sketched out some plans for it on a notepad and the next day, I went to the lumberyard and picked up the materials. I was taken back to our house building time and, as it was then, that night I dreamt of how I would build it (this is a very useful strategy!). I was up at 6am and ready to get to work.

By 6pm, it was built. Mind you, I didn’t work alone. My neighbour, Ray, came and helped me for most of the day too thankfully. I couldn’t have built this without him (see post-script).

I ended up using all treated lumbar. I planned to stain it black (obviously) and treated wood simply made the most sense for longevity and cost. I used five 6×6 rough sawn posts for the base and double 2x6s for the upper frame. The top slating is 2x4s spaced 8” apart (figuring out the spacing was the hardest part). I like the 8″ spacing for a couple reasons – it still allows a reasonable amount of light through for our needed solar gain in the winter and the 8″ correlates nicely with the 2×4″ lumbar (too big or too small looks weird). The long side of the pergola runs 16’ and the short side is just under 10’. I secured the posts to the deck (the deck is 2×6 boards) using a simple Simpson post support with 3” screws and lag screws. The top beams I secured to the posts using my Kreg Jig (best tool you can buy) and did the same to secure the slating to the beams. This was a lot of jigging, but you get excellent stability with the Kreg Jig. The slating overhangs the beams by 8” at the front and is flush at the other three sides.

On the west side, which is where our prevailing windows are from, I put up a slated wall using 1x6s that I ripped down to just under 1 ¾” wide each (which allows for 3 equal slats per 1×6 board) and spaced them roughly 1” apart (the depth of each 1×6 – just use a scrap piece to line the next one up). This slating is a repeated theme around the exterior of the house with the outdoor shower and base of the outdoor countertop (and when the front stoop stops sinking I want to do the same at the front door). 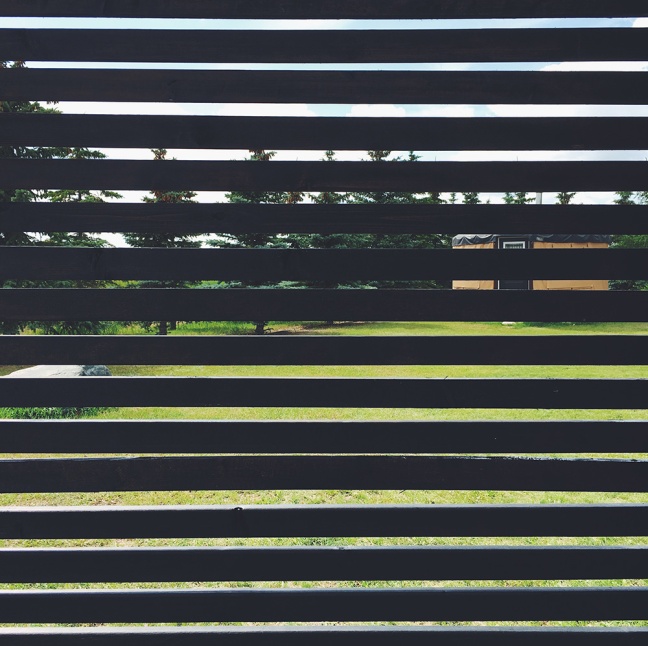 Although the build went relatively quickly, the staining part took my upwards of three days the next weekend. Ug. I forgot how much work it was to stain all this wood. My shoulders were so sore from all of the overhead work. I used the same Auson black pine tar with linseed oil (50/50) mix on the pergola, which gives it the same matte black sheen as the exterior of the house. 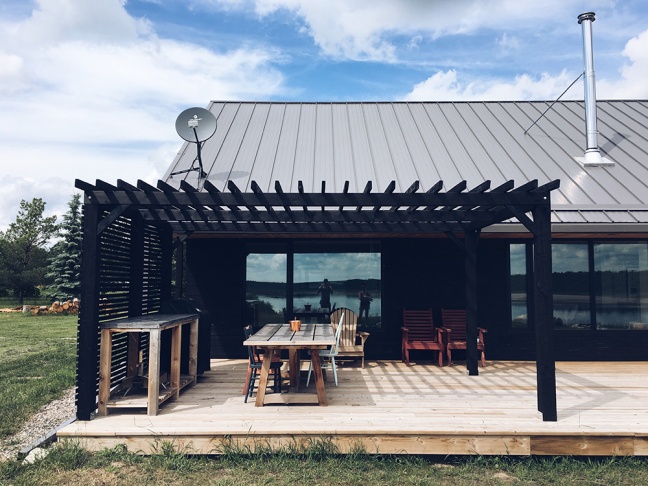 This was the last project I did with my neighbour, Ray. The following weekend we received the shocking news that he’d passed away suddenly and without any warning. It didn’t seem real. We were totally devastated. Ray was more than just my neighbour. He was my dear friend. He was my father figure out here. We were so naive when we’d moved out to the country and he’d taken us under his wing and been there whenever we needed him – which was a lot. I’ve written about him on his blog before and all of the help he’d given us in the building the house. He spent countless hours helping us with the house. He walked over here everyday during construction to check on the progress and to make sure the contractors were working. He’d allowed us to share his garden for two years and helped me establish our own. He’d come and cut our grass when I was too busy in the house. We had dozens of dinners at his home when we’d been working all day and night the first couple of years. He’d bring us pies or cinnamon buns just because he had some extra. He cut a path to our house along the river so we could be connected. The gratitude I have for this man could never have been repaid. He was one of those very rare people who would drop everything for you whenever you needed them. He was patient, humble, honest and sincere.

He taught me so much and has made me feel competent out here. He showed us how to truly appreciate living in this beautiful place. It will be difficult for us without him. I will miss him terribly.

Rest in peace my friend. 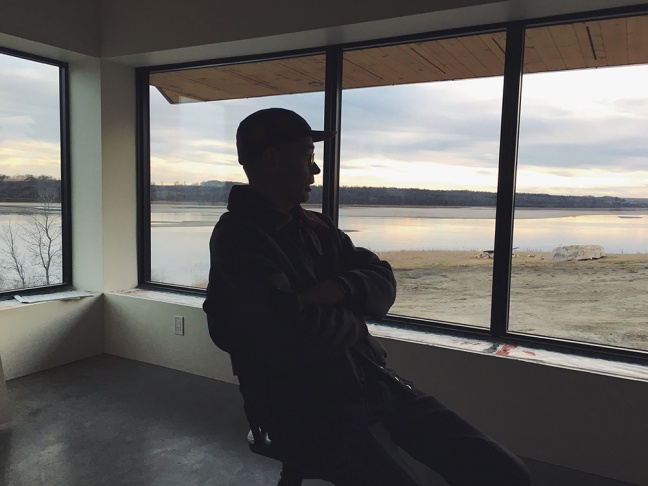 3 thoughts on “Building a Pergola”