One of our primary motivating factors for moving out of the City two years ago was to be able to produce, grow, harvest and consume our own food. Although we’d been “distracted” in the building the house (see previous 75 blog posts) for the past year and a half, with this now (relatively) complete, we could focus on the land and start to establish our garden and orchard.

We planned to get started with some of the orchard plantings this year, but before we did anything we would need a fence… And not just any fence but an Ungulate Fence! Also known as a Wild Game fence (although ungulate is much funner to say). This is no ordinary fence, mind you. This is a serious beast of a fence – at 8′ in height and made up of high gauge tension wire and heavy large posts, this fence will keep all large animals (deer, in particular, being the problem in our area) from decimating the garden, berry bushes, and fruit trees. You see, ungulates (deer and elk) can jump pretty darn high – up to 7′ straight up – and they like food, especially fresh tasty grade veggies and ripe berries. So, an 8′ fence is the minimum height to ensure your area will stay protected.

Last year we’d plotted out the site of the garden – between the shop and riverbank’s edge. And, well, it would be massive. Growing up, my parents had a large urban garden, which was about 50×75′. It was large enough to feed our family of four all year. My parents would freeze, blanche, and can fruits and vegetables in the autumn, which would last us until the following summer when the fresh produce would be ready again. I really had never tasted vegetables that were not grown in our own garden until I moved out of my parents house. “This is what people think vegetables taste like?”, was all I could think when I first shopped at the grocery store – blech!

So to some degree, it’s been the desire to get back to the land that has led us to this place.

Being that we had to build such a heavy-duty fence, I thought it would make the most sense to build the garden/orchard big. Like big big. My reasoning was that it would be a lot of work to build more fencing and prep the land again if we found we wanted it larger later. And in the back of my mind, the thoughts of a possible CSA food program, market garden, co-op garden, or U-pick orchard, is kind a long term potential but who knows.

Anyways, we plotted the garden/orchard out at just under a 1-acre area. That should do. I imagine it will eventually be likely 60% orchard and 40% garden vegetables.

The area though had never been planted with anything but pasture grass and all varieties of weeds were abundant. I’d tilled the area four or five times last summer in an effort to kill off as much as the weeds and quackgrass as possible. In the later part of the Fall, a friend of mine was able to bring in 25 yards of compost to help the soil.

And so the big project for the 2016 year was to build this mother of a fence and get some fruit trees and berry bushes in the ground.

We’d been able to purchase all of the game fencing used off of Kijiji last year from a farmer who’d raised buffalo (they can only jump 6′ high by the way).

And so in early June, on especially hot week, Darcie and I took a week of “holidays” to work on the fence.

I did find a very good article on how to build the wild game fence, which we read the day before starting. “We got this shit,” we said jokingly… We had no idea what we were about to get ourselves into… But you know what, sometimes a bit of naivety is a good thing when one lives out in the countryside.

The first three days were spent putting the posts in the ground. These are big awkward things – 12′ tall, 5-6″ in diameter and weighing about 40-lbs each. I used a post hole auger on the tractor to dig a 6″ hole which we then filled with water to allow the post to slide in. Darcie and I would then lift and drop it into the hole and get it level. From there, I’d stand on a ladder and using a 14-lbs post sledge hammer (I kid you not), I would pound the post into the hole to secure it as Darcie held it level. Um, it was a lot of work. And we did that 54 times for all of the perimeter posts. I didn’t even take any pictures of this work – mostly because I didn’t want to remember it.

The following day we convinced two of our good friends to come help us with the 12 cross beams that would need to secure the corners and gates. 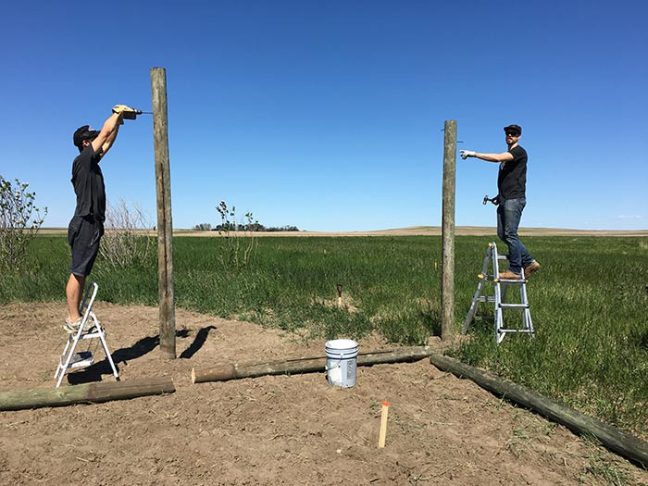 We used a chain saw to cut the 12′ posts to the correct length and then drilled pilot holes into the standing posts. We then pounded 10″ spikes through the posts and into the beams. 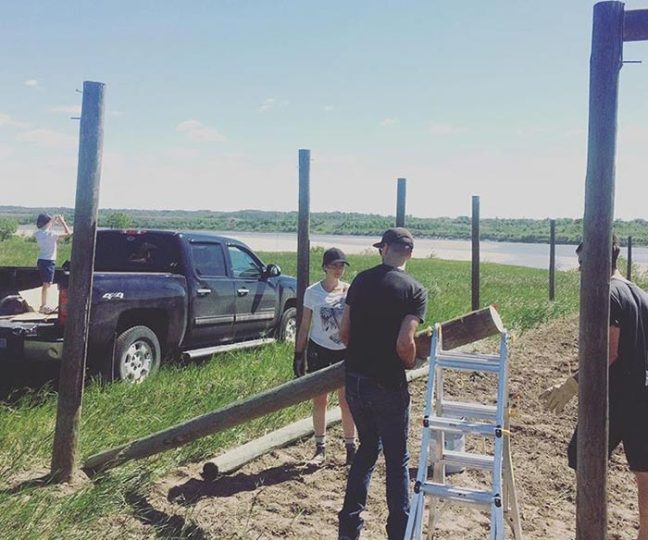 The following day was easily the worst day of all though. And probably the one that from viewing you would not know we’d really done anything. At each section that a beam had been placed (12 in total) you need to string a diagonal tension wire to give added support and stability to the fence. This is a crucial part structurally and is terribly difficult. The wire is a 16-gauge high tension wire that comes wrapped on a spool. We needed about 90′ for each section to wrap it twice and secure it with a metal ratchet.

Unfortunately when you try to unroll the wire off of the spool and cut it, it has so much tension that it would fire off of the spool like a tightly wrapped spring (which is pretty much what it is) and tangle itself into a terrible mess. The wire is crazy sharp too, so as I was cursing and swearing, trying to untangle it, it was cutting and slicing my arms and body. I looked like a whipping boy by the end of the day.

Then we had to hold the wires in place between the beams and ratchet them tight with the world’s worst tool (see above photo) to tighten the wire. There’s so much tension on the wire and it needs to be very tight that I completely buggered my wrist that day. It would be 3 weeks before it would be feeling better.

The next day, which according to the instructions was “the most difficult and tedious” part of the fence build (oh great), was to string the actual fencing.

We had two 440′ rolls of the fencing that we rolled over to the long side of the fence. We unrolled a hundred feet or so at a time and stood it up to the first fence post and hammered it in using the heavy-duty fencing staples. Then we went section by section, unrolling a length, standing it up and hammering it in. The trick is to leave some wiggle room when pounding in the staples so that the fence wire can move a little bit back and forth. Once we got halfway down or around the corner I used the tractor to tighten the wire. The instructions suggested using two 2x4s and bolting them together between the fence and the slowly snugging the wire, which really worked like a charm. 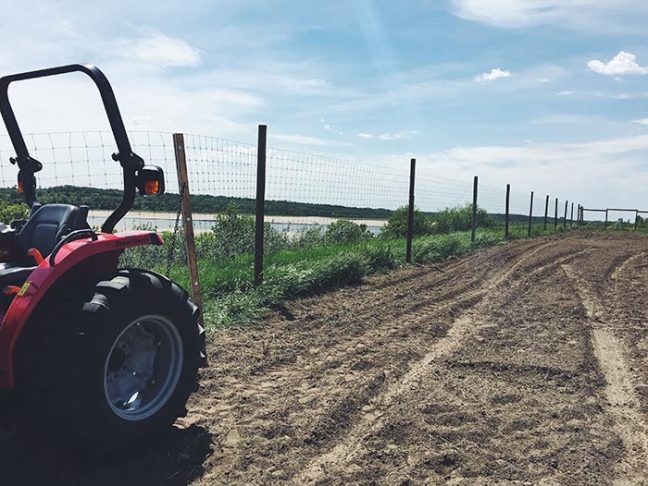 Once we had it snug we tightened up the staples in the corner and put 4 staples on each standing post (not too tight though). It went like this all around the fence. Honestly, of all of the fence building, this to be the easiest part. (Easy being a relative term of course).

In this photo you can see those cursed diagonal tension wires.

Once my wrist had recovered sufficiently a few weeks later, we were able to put up the gates. 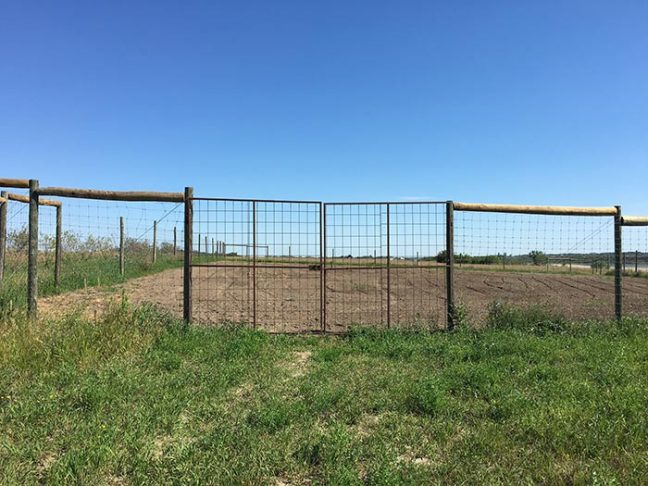 And there you have it. A real-live DIY wild game fence.