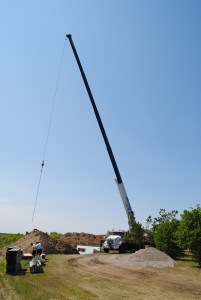 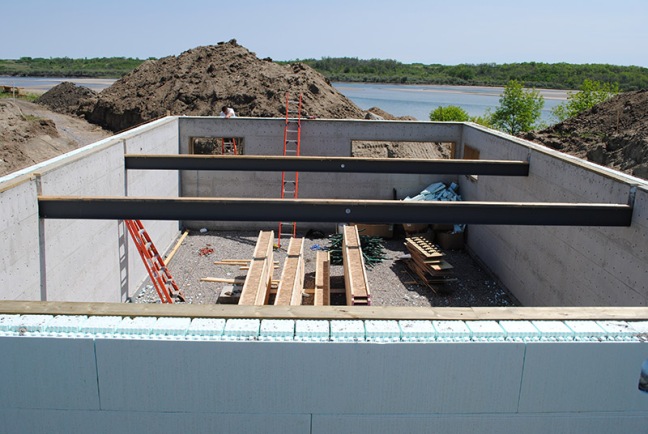 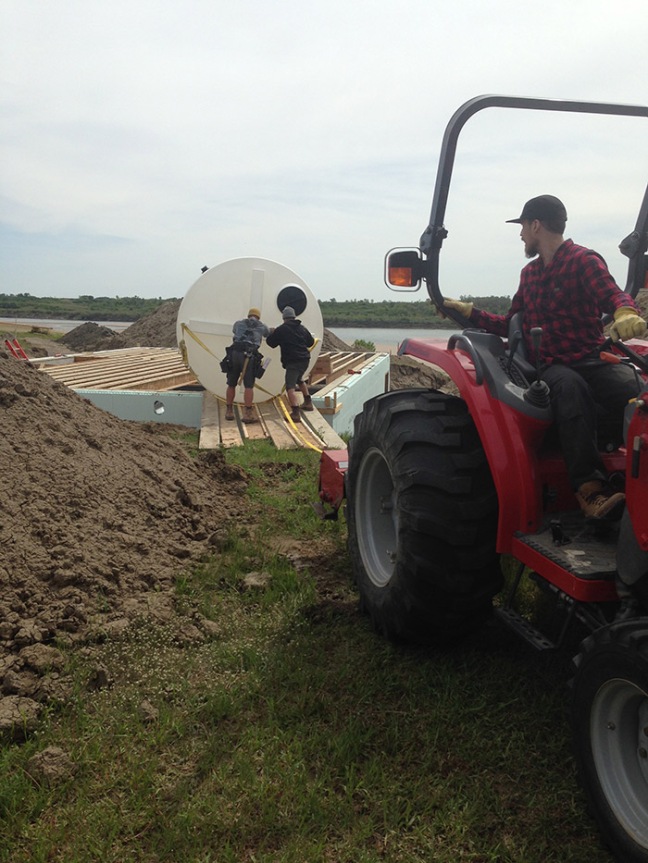 First we had to remove all of the exterior bracing that the builders had spent four days installing, tweaking, levelling, and straightening. 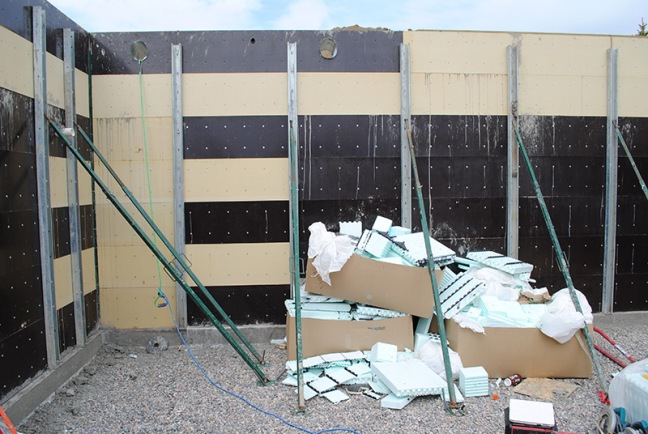 They had done a great job. The walls were perfectly straight and square.

We started unscrewing the plywood forms and Cha-Ching! 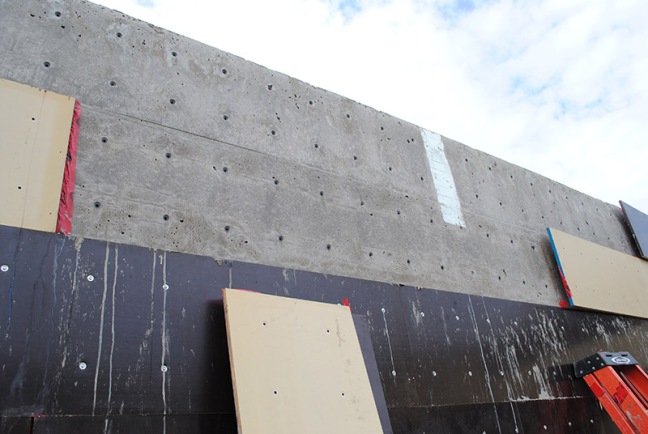 As we removed the forms, I had to chuckle, because the builders, who had for the previous week been cursing the Nudura One system, as they saw the finished look decided the would “use it again.” I guess looks due make up for a bad personality from time to time.

We spent about two hours removing all of the forms. As we got towards the base of the floor, we crossed our fingers hoping that it had all settled nicely to the bottom without any “honey combing” of the concrete that would need to be parged. Impressively, it looked excellent all the way from top to bottom. 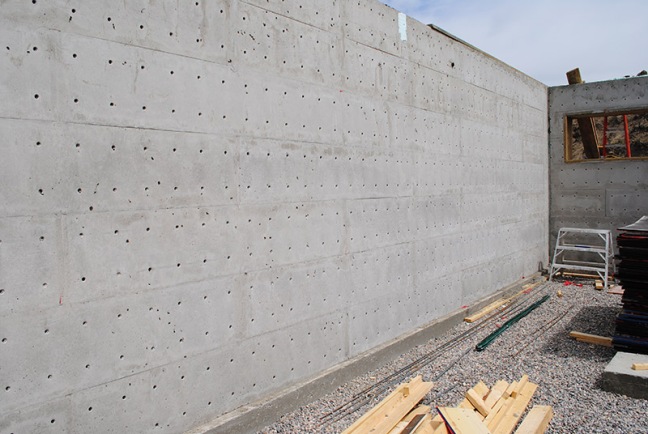 Dang, those are sexy walls.

Meanwhile, the foundation work continued to move forward. A few weeks ago I’d written about the Nudura One Series of ICF. We were quite excited about it for a number of reasons. Firstly, basements are generally BORING. So, with using this system of ICF we could have a finished interior wall of concrete immediately, which would look aesthetically pleasing and be something of interest and uniqueness in the basement. No need for any extra framing and drywall. Second, in terms of energy efficiency, this system should perform better than conventional ICF. You are not insulating the walls of the basement from the house itself (standard ICF and standard poured basements have insulation on the inside and cannot use the thermal mass of the basement walls). Being that we have a huge thermal mass in the walls (and floor) of the basement, they can store a lot of heat to radiate to the rest of the house either through sunlight or simply from the in-floor hydronic heat. Essentially functioning like a giant battery.

About a week prior the forms had been sent out. There was an incredible amount of insulation that was stacked in the shop.

And the day following our stresses with the septic system, Taylor and Curtis got to work building the basement forms. They had budgeted about four days to get the forms up and one day to pour. ICF goes fast, they said.

… But not this ICF. This basement was a massive pain in the ass. After one day, the guys only had one row of the seven done. There was no simple way to attach the forms and keep them locked in place. You see, in standard ICF, the blocks are basically like Lego. There are little grooves on the inside and outside that line up and attach to the corresponding little plugs on the other block. Snap snap snap, it goes together. Easy.

This was not easy. The little Lego grooves and plugs were only on the outside of the blocks. Not the inside,  as the plywood slabs simply butted together creating big seams and gaps (wouldn’t tongue and groove plywood have made sense, Nudura!?). Frustrated at the lack of progress, Taylor called the Nudura sales rep who came out to the site. Amazingly, he had never seen the Nudura One series before. Like never ever. As they all worked together to try and troubleshoot this problem, they eventually decided to call the head office in Ontario, Canada and their technical support team.

They suggested make 2×4″ L-brackets to support and anchor the forms (uh, that’s part of the plan?). Oh and as for the gaps in the plywood? (Where concrete would completely burst from when pouring.) Well, just use Tuck Tape, they said. Tuck tape!?? (I suppose it’s slightly more classy then duct taping the forms). Jeez Louise.

Unfortunately, after building a bunch of the 2×4″ L-brackets and bolting them onto the forms, the carpenters realized that this was not going to work at all. These brackets did nothing and if anything made the problem worse by pulling the forms further inwards, causing even greater warping of the walls. Thanks for the “technical support”!

(You’d think they’d never sold this product before – which, later we found out they have never actually used it in a residential application!)

Over the following four days, Taylor and Curtis grudgingly put the forms together and stacked them higher and higher, eventually reaching the top at 10’6″. They put an absolute tonne (perhaps 2 tonnes) of rebar in the ICF both vertically and horizontally to reinforce the high walls and provide the structural support for the beams, joists, and double wall that would sit upon it. Seeing the forms go up was pretty exciting, but just don’t look too closely or right down the line of the wall… 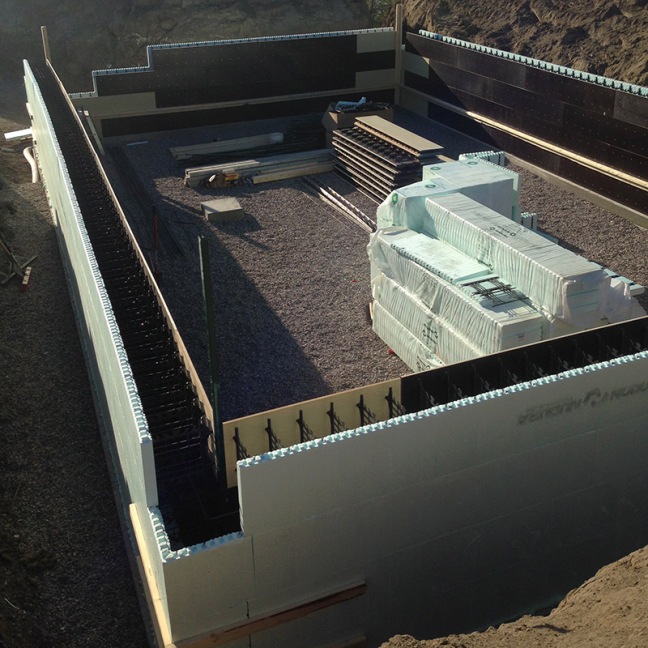 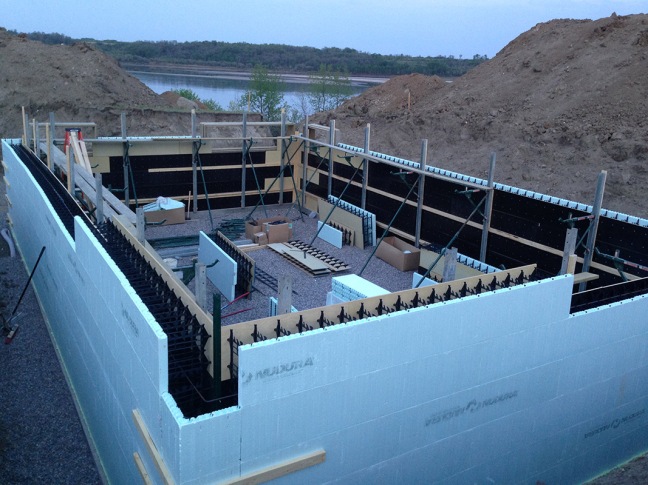 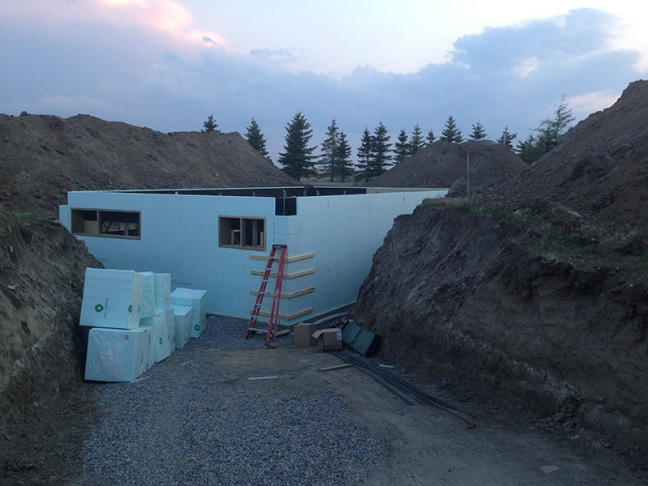 Because that ain’t straight.

I have to admit, I was more than a bit worried. How the hell were they going to straighten these walls? I wondered.

Taylor and Curtis had also eaten through their projected timeline and still had to try to straighten the walls. After four days the walls were not even stacked, let alone straight and ready for concrete. Over another three days, all they did was straighten and adjust the walls. Using large bracing and strapping to make them level, straight and even. When Taylor finally told me they would be pouring concrete the next day, I had to run over and make sure. 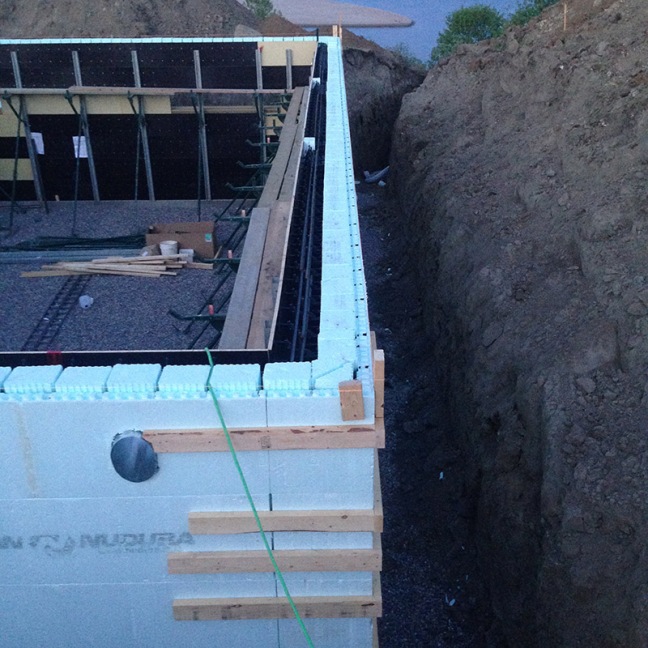 Praise Jebus! (This whole process is making me become very religious it seems.)

The following day the pumper truck was out, pumping a buttload of concrete into the basement walls. Now was the real test of the untested Nudura One walls and the Macgyver skills of the build team. 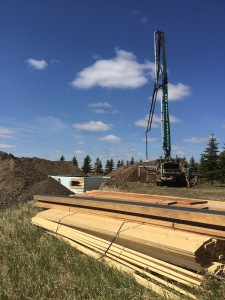 I was nervous that day at work, just waiting for the phone call from Taylor explaining that there had been a catastrophic failure when the walls of the forms burst under the pressure of the concrete causing the walls to break apart and concrete to fill our basement.

But that call didn’t come. Relieved, we drove home at the end of the day. The walls were still standing and they were filled to the brim with concrete!

The next day we would pull the plywood off and see what magic laid beneath.

PS. Nudura has offered to cover at least some of the extra time of the build team for Research and Development of the Nudura One series.